At Horizons, Moving Toward Equity—Together 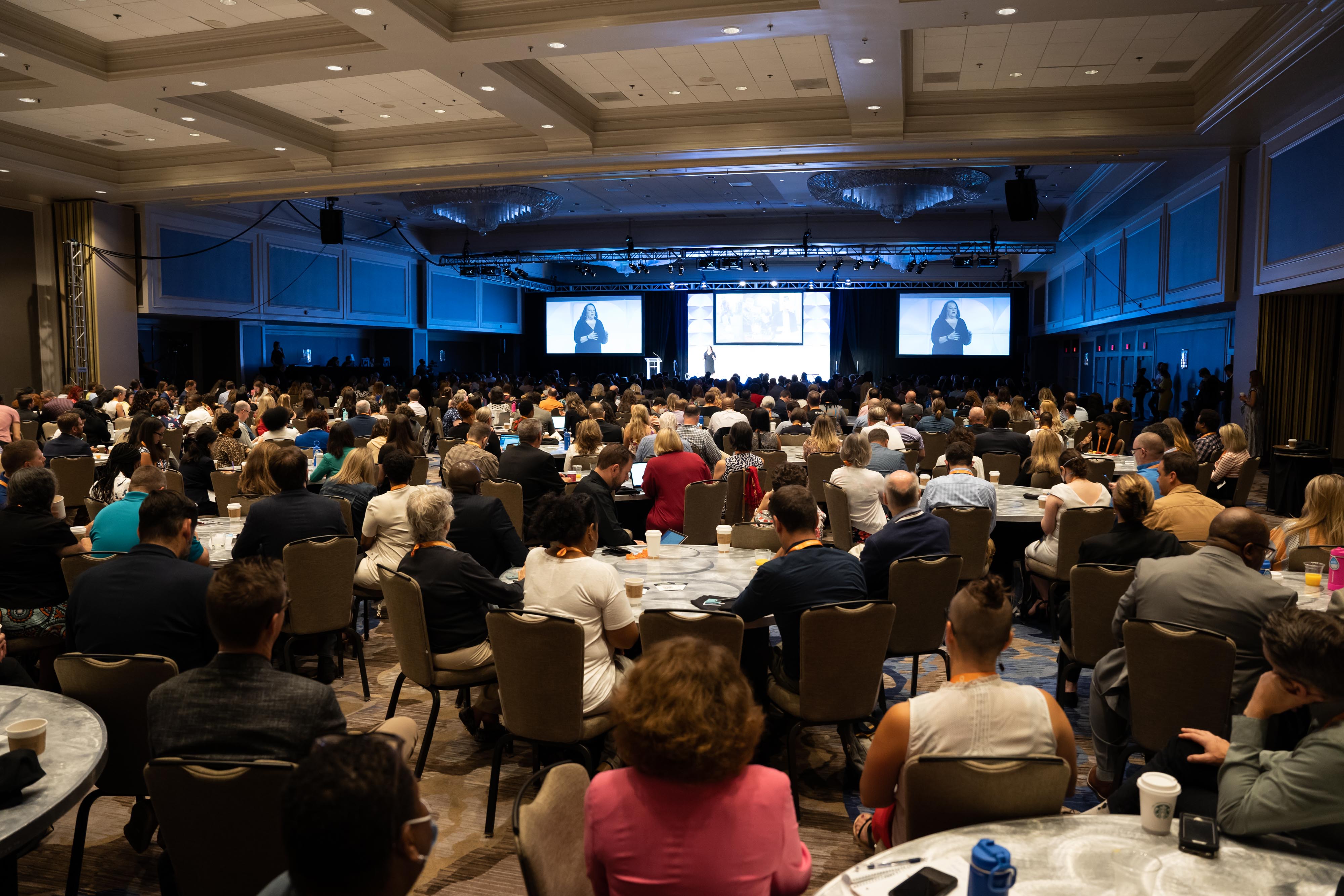 Four key steps to an equitable economic future from innovators and leaders at the 2022 summit.

At this “heavy” moment in our country’s history, it’s easy to want to give up, Jobs for the Future CEO Maria Flynn told an overflow crowd at JFF’s annual Horizons summit in New Orleans. Our learners and workers are weighed down by seemingly insurmountable forces: the pandemic, a volatile economy and uncertain job market, partisan divides, and structural racism.

But instead of choosing to “throw in the towel, head on over to Bourbon Street, and leave it for someone else to figure out . . . let’s leverage the frustration and uncertainty we’re feeling to drive our desire for a better future and work together,” Flynn said. “We need to embrace new ways of thinking, new ways of operating, and new ways of collaborating.”

Flynn and other speakers urged attendees to “see beyond” what seems possible today and envision a new ecosystem of learning and work that centers the needs of learners and workers. It must be intentional about dismantling the structural racism embedded in postsecondary education and the labor market, and emphasize collaboration to solve the big-picture problems affecting our country’s families, communities, and economies.

“Everything that matters truly to us are things we can’t do on our own,” said keynote speaker Heather McGhee, author of The Sum of Us: What Racism Costs Everyone and How We Can Prosper Together. “It’s that collective problem solving that is harmed most when some of our best players are left on the sidelines” due to racist practices, policies, and systems.

Don’t Keep Talent From the Table

Structural barriers and gatekeeping—from hiring bias against people who have been incarcerated to systemic racism that prevents Black Americans from building wealth—aren’t just a diversity problem for companies and institutions to solve, said McGhee. They’re preventing us from solving some of our greatest global problems, from the climate crisis to health care disparities. McGhee spoke of the “zero-sum lie” that perpetuates the idea of finite opportunities and resources—an idea, she said, most frequently adopted by white people, and used as a reason to exclude Black people from quality education, success, and economic advancement.

Leaders in fair-chance and skills-based hiring encouraged employers and institutions to take action to minimize zero-sum thinking. Ken Oliver, executive director of the Checkr Foundation, which promotes fair-chance hiring and advancement for people who were formerly incarcerated, said it’s essential to start career training inside prisons so we can place people who are reentering the community “in positions all across the corporate ladder,” not just entry-level jobs. “I don’t want people to lower the bar. I want people to lower the barriers.”

He pointed to Jordan Brand’s Miller, who was incarcerated as a teenager and now runs a multi-billion-dollar business, as the ultimate example of why employers should not only hire people with criminal records but create opportunities for them to thrive.

“Where this country is today, there’s an incredible need for more talent, more creativity, more intelligence, and a lot of that is being wasted away inside prisons and penitentiaries,” Miller said. “For businesses and companies who understand that opportunity and get out ahead of it, I think that’s going to be a major benefit for them in the long run.”

Conversations focused on expanding educational pathways for learners, including both innovative degree programs and other learning opportunities. Byron Auguste, president and cofounder of Opportunity@Work, announced a new initiative called “The Paper Ceiling,” designed to name and dismantle the invisible barriers to advancement created through degree-based hiring for “STARs,” individuals who are Skilled Through Alternative Routes. And LaShana Lewis, a DEI and nonprofit consultant, left everyone with a call to action: find five open roles in your company, she advised, and rework the job descriptions to remove the degree requirement.

Put Learners at the Center of Education

Scott Pulsipher, the president of Western Governors University, offered a single-word assessment of the pandemic-inspired transition of colleges to online learning: “Rubbish.”

While Pulsipher is a promoter of online learning, he said the rapid shift during the pandemic too often centered the needs of faculty and institutions instead of students. And the resulting enrollment drop isn’t just a response to the past two years; it’s the culmination of a steady decline of nearly two decades. Leaders across sectors agreed: postsecondary education is too expensive, too disconnected from career skills and outcomes, and too inaccessible to most students.

To make postsecondary education successful and effective, experts said, both institutions and employers need to shift their focus away from the traditional model, which has primarily benefitted white male learners, said Rachel Romer Carlson, CEO of Guild Education. Instead, they must explore what today’s actual learners—many of whom are single parents, working students, and first-generation collegegoers —need to succeed. Developing wraparound supports, including access to affordable food, transportation, child care, and housing, is essential for improving program completion and career outcomes.

“You need to recognize that students are humans first,” said Christina Hasaan, a parent and recent Temple University graduate. “Before they decided to take on the title of student, they were moms, dads, employees, individuals with lives. And being a student just makes it that much more complicated.”

In Tech, Be the Federation, Not the Empire

Swisher, interviewed by JFF board member and Amazon in the Community executive Alice Shobe, critiqued our best prospects for technology innovation right now: “We have all these tools to educate people and we don’t use them that way. Instead, we use them to post pictures of air fryers on TikTok.”

There’s enormous opportunity to use technology to rethink how we connect, educate, and train people, Swisher said. But Big Tech leans too much toward the future envisioned by the Star Wars evil Empire—unending battles and threats where tech is used primarily for negative purposes—instead of the Star Trek Federation, where it’s used to bring people together to explore and problem-solve. It’s up to its users—all of us—to “start leaning into the promise of the Internet, and take it back” from the leaders in government and the private sector who are under-applying it.

In panels and breakouts, emerging entrepreneurs shared how they’re following Swisher’s directive by developing tech tools that recognize the shifting needs of learners and workers often overlooked and excluded from traditional systems. These include digital credential wallets, which allow workers and learners to create portable, transferable skills portfolios, and text-message-based communications to keep deskless workers and remote learners connected and engaged.

Dmitri Zagidulin, chief technical architect for the Learner Wallet Project at the MIT Digital Credentials Consortium and CTO of HyperConstruct.io, said that users have great power to shape the metaverse in the years ahead and incorporate new technologies, from blockchain to VR, into the learn and work ecosystem. “Metaverse is a flexible enough term to encompass all the things we’re starting to do on the web,” he said.

For key players in regional education and economic systems, this might mean information and data-sharing to boost learner and worker outcomes; for entrepreneurs, it might mean creating “bridging infrastructure” between the “new islands being built every single day” by emerging companies, as explained by Hamoon Ekhtiari, founder and CEO of FutureFit AI.

At the individual level, personal and professional mentorship were held up as critical steps toward advancement for learners excluded from or underserved by existing systems. Incarcerated students, who will be eligible for full Pell Grants starting in 2023, may need help applying for financial aid to begin their college-in-prison experience, for example. For Black learners and workers, in particular, creating access points to networks that build social capital will be key to reducing the racial wealth gap, and ensuring access to and success in education and the workforce.

“The notion that….[someone] will show up for you no matter what—that’s what people need when it comes to jobs,” said David Shapiro, CEO of Mentor. “Eighteen-year-olds are making the biggest decisions of their lives at these junctures. If you’ve not walked these paths before, who is there to walk with you?”

At Jobs for the Future's Horizons summit, experts from across sectors offered insights on how to engage, support, and upskill an overlooked talent...

At Horizons, Moving Toward Equity—Together

Four key steps to an equitable economic future from innovators and leaders at the 2022 summit. 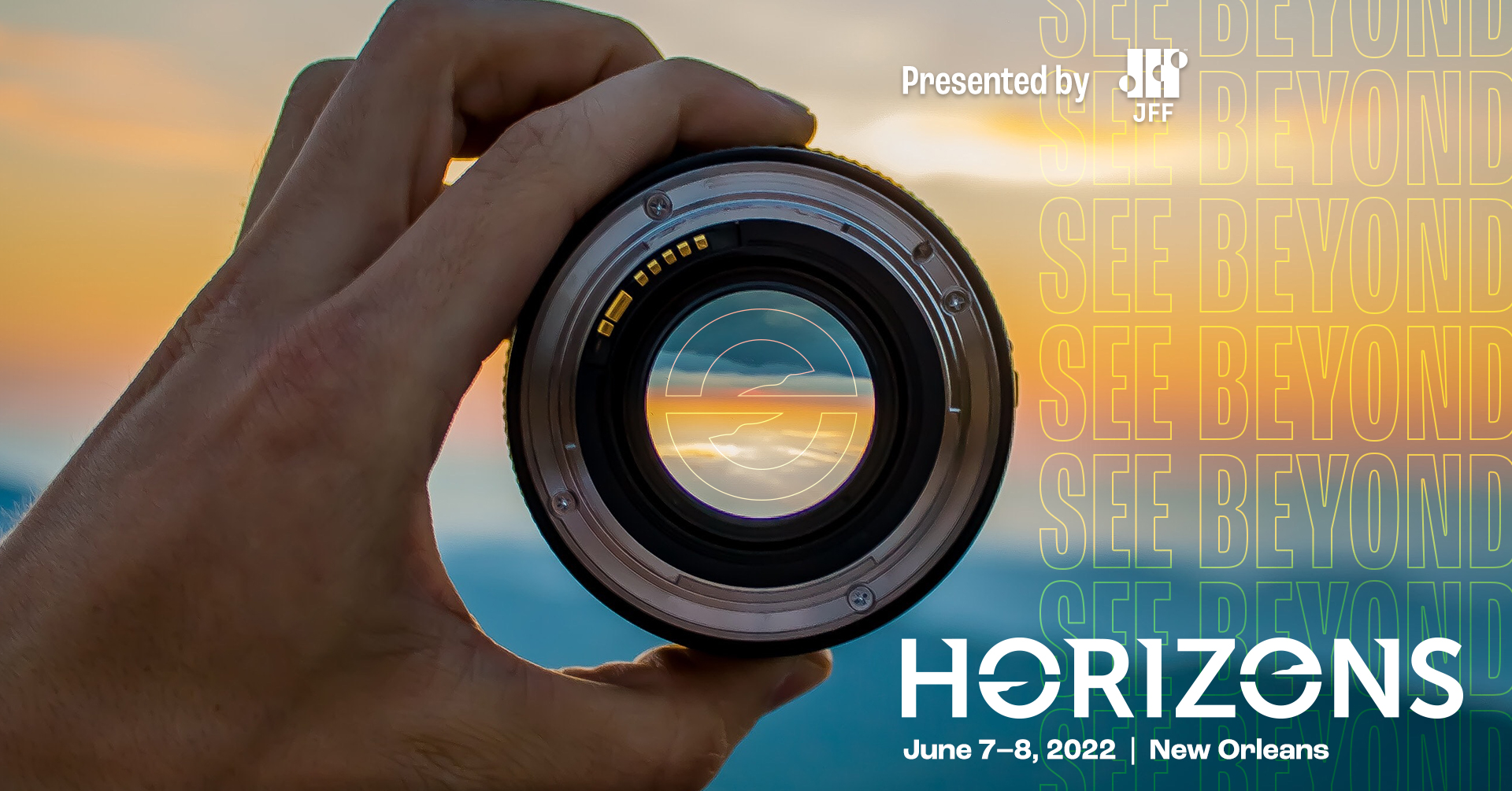 Horizons: Looking Back to See Beyond

“We need to . . . do a better job of making the time to truly step back and reimagine and to let ourselves really think about what’s possible if we...