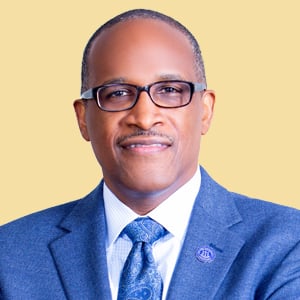 Kimbrough has been recognized for his research and writings on HBCUs and African American men in college. Recently he has emerged as one of the leaders discussing free speech on college campuses. Kimbrough also has been noted for his active use of social media. He was cited by Education Dive as one of 10 college presidents on Twitter who are doing it right (@HipHopPrez), and profiled in the text, “Digital Leadership In Higher Education.” In 2020 he was named by College Cliffs as one of 50 Top U.S. College and University Presidents.

Dr. Kimbrough has forged a national reputation as an expert on fraternities and sororities, with specific expertise regarding historically Black, Latin and Asian groups. He is the author of the book, Black Greek 101: The Culture, Customs and Challenges of Black Fraternities and Sororities, and has served as an expert witness in a number if hazing cases.