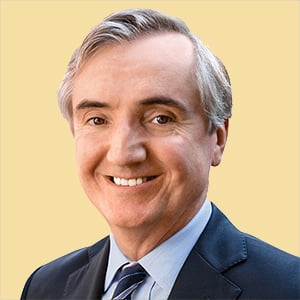 Joseph Fuller is Professor at the Harvard Business School, a Visiting Senior Fellow at the American Enterprise Institute and a Senior Fellow at the Burning Glass Institute. He was a founder, first employee and long-time CEO of Monitor Group, the global strategy consulting firm, now Monitor-Deloitte.  Joe worked with clients in a wide variety of industries and a number of governments and multilateral institutions on issues of competitiveness.

Joe’s research focuses on two major topics—the changing nature of work and the evolution of the C-Suite.  He oversees two ongoing research projects on the future of work, Harvard Business School’s Managing the Future of Work Project and the Project on the Workforce, a collaboration between Harvard Business School, the Harvard Kennedy School of Government and the Harvard Graduate School of Education. Fuller has studied and published extensively on the various forces affecting the evolution of work, including technology, demographics, the skills gap, the care economy, and the potential impact of Covid on work practices. His most recent papers include Hidden Workers, Untapped Talent, which ninvestigatedhow the ways in which companies implement their processes for attracting and evaluating job candidates artificially constrains the applicant pool and exacerbates the skills shortage. Building from the Bottom Up examined the experiences of low-wage workers in their efforts to forge career paths and the attitudes of employers as to the factors influencing their workers’ prospects. It revealed sharp differences in both the beliefs of low-wage workers who had advanced and those that had not and in businesses’ descriptions of their programs to support workers and their implementation of them. The Emerging Degree Reset, written in partnership with the Burning Glass Institute, revealed a reversal in the trend toward degree inflation and how companies rely on college degree attainment as a proxy for social skills.

Joe is a widely published author. His work has appeared in the Harvard Business Review, the Sloan Management Review, CEO and Across the Board, Directors and Boards, the Journal of Applied Corporate Finance and Newsweek magazines, the Wall Street Journal, the Financial Times, BusinessWeek.com, Bloomberg.com, China Daily, the Washington Post and the New York Times International edition, The Hill, Politico and Axios. He has appeared on the CBS Evening News with Nora O’Donnell, the NBC Evening News with Lester Holt, France 24’s Evening Report, and PBS’s Marketplace and CNBC.